Driving is such a normal part of our day that we often forget just how much risk we undertake every time we turn the key and fire up the engine. We forget that 2.3 million people are injured every year from car accidents, some of which cause considerable physical disabilities. Today we’ll go over a few ways that you may be “multi-tasking” in your vehicle that you may have not considered before.

According to RoadLoans, there are well over 200,000 drive-thru’s in the United States. Every time we go through the line and get our food, we’re simply becoming another potential distracted driver. This isn’t to say that it’s illegal, or even that it should be illegal, but you’ve added one additional element to your commute that wasn’t there before. What happens when you spill your coffee on your pants or seat? Do you remain calm and pull to the side of the road, or do you frantically reach for the napkins and possibly put other drivers in harm’s way? When you get a burger that requires two hands to eat, are you driving with you knees or haphazardly trying to do both at the same time?

Talking on the Phone

Newer iPhones have the capability to pause all texts and calls while you’re driving, though it seems to be underutilized (and can easily be turned off). Many people justify talking on the phone while driving because they either use headphones or the built-in speakerphone function to talk. Headphones are never a good idea to use while driving, as they hamper your ability to hear car horns and emergency vehicles. Even using speakerphone can be distracting, as many people think about the conversation they’re having instead of solely focusing on the road ahead of them.

The safest way to multi-task while driving is to not do it at all. 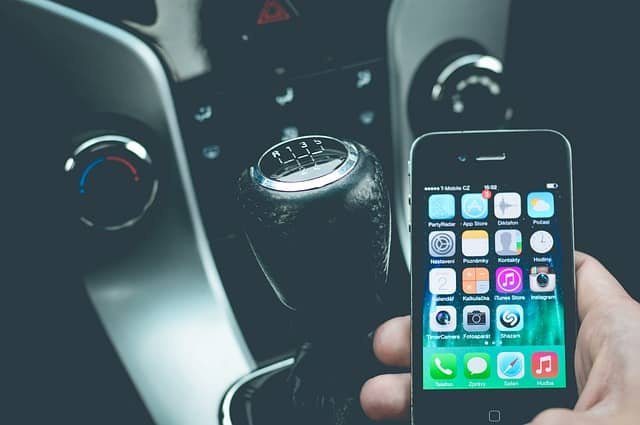 This should be a no-brainer, though our daily commutes often encounter a young woman putting on makeup in her car. This is extremely dangerous, as it takes not only your eyes off the road, but your hands off the wheel as well. It requires concentration to put on makeup, no matter how many thousands of times you’ve done it. It’s simply not worth the risk of bodily hard to yourself and others. It’s often been said that women are better at multi-tasking than men- this is not the time to put that assumption to the test!

This one is last because it’s probably the riskiest, though one of the most common, ways that people attempt to multi-task while driving. This is blatant distracted driving, and policemen are on the lookout for these drivers. Classic signs of someone texting and driving is veering in and out of a lane, going to fast or too slow, and quick jerks to correct. Choosing to text and drive is not a smart decision, and while you may think nothing will ever come of it, it only takes one time for disaster to strike.

Some of these items are more dangerous than others, but it’s always best to keep your hands on the wheel and your eyes on the road at all times. Defensive driving can save lives. If you or someone you know has been in an accident because of a distracted driver, please contact us.